There are some things in my life that make me proud – no I don’t care about deadly sins. If I’ve done, or have been a part of, something that is truly important and worthwhile, I’m proud of myself for standing up when others have not. One of those things is my involvement with various advertising campaigns – either in support of victims, or for educating people to prevent more people being victimized. Such was the case yesterday when a new meme was created from my contribution to the RAINN Day campaign and Unite Against Rape. This particular campaign is geared toward stopping rape on college and university campuses. They asked for suggestions on how campus rape could be prevented, so I sent in an e-mail.

Well, they apparently liked what I sent them, because they decided they would create several memes quoting my suggestions. This is the first of the series with my quotes: 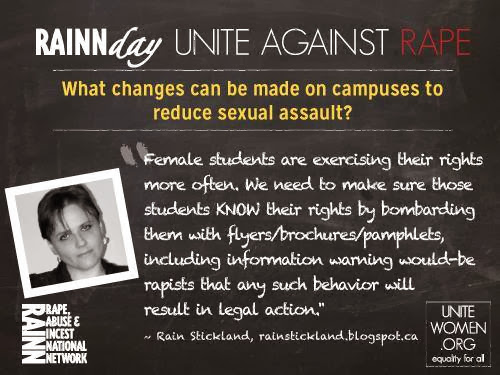 I’m very grateful to them for including my blog URL, but even if they hadn’t I would still have sent in my suggestions. Being a part of something like this is a huge deal for me. RAINN is a very big organization, the largest anti-sexual assault organization in the United States, and I’ve gone to their website in the past to research rape statistics for various articles I’ve written.

UniteWomen.org isn’t exactly a poor relation in the activism arena, either. According to Wikipedia it has 21,000 members. I have become friends with a number of the members, including those that run it, and I have to say they’re a wonderful bunch of women. In some cases I was Facebook friends with them long before I realized they were even a part of it. They did a meme of me a few months ago, with their Stand Against Rape campaign, where we were all standing for the Steubenville rape victim to let her know she wasn’t alone and it wasn’t her fault. It turned out I was friends online with the woman who actually created my meme, and I had no idea until a few days ago.

So, yes, I’m quite proud to be a part of this campaign, and to be associated with such a great group of people. +RAINN helps so many victims with their hotline. +Karen Teegarden of UniteWomen.org, as well as +Renee Davis, +Shannon Fisher, and +Sarah W. Chamberlin, do outstanding work with these campaigns, and I have nothing but respect for the care and effort they put into helping women. They don’t just get involved in rape-prevention and awareness campaigns, either. They get involved in the political arena as well, fighting legislation that is detrimental to women, and there’s been plenty of that going around in 2013.

Obviously, considering my childhood experiences, rape prevention is a topic that is very dear to my heart. I  know very well that you can not only survive the experience, but thrive and have a normal life eventually. That doesn’t negate the damage that’s done in the meantime, however. Being raped means that you get a portion of your life stolen from you and you lose the person you were. You never get that person back – the person that you would/should have been, had you not been raped. That life is completely stolen from you. Most people who have been raped, and I include men in this because I’ve known some that it has happened to, lose many years of happiness and productivity to misery, anger, fear, depression, self-hate, shame and guilt. Those are years that they can never get back.

My own experiences happened during childhood – starting around seven or eight, and right through thirteen. I’ve only been truly okay for approximately the last ten years. No more flashes of things that happened, no sick feelings coming over me at odd times, and no bad dreams related to it. Basically it took me about twenty years to move beyond being raped to the point where I could really be a happy and whole person. Life is too short to allow people to steal twenty years from anyone. Penalties for rapists should match the damage that they’ve done, yet most rapists do not spend anywhere near twenty years in prison. The largest percent of them are never brought to justice at all.

Then there are the people who never really do get over being raped. It’s worse when it’s a family member you’re supposed to be able to trust, such as my own situation where it was my grandfather first, and then my half-brother. The ones who are forced to endure the company of those family members, by way of family  gatherings, have a much harder time dealing with it. I was lucky because I never saw my grandfather after the age of fourteen, and then he died. Many years passed between occasions where I saw my brother, I haven’t seen him in years, and I will probably never see him again. I don’t have to worry that I will be cornered somewhere and something unwelcome might happen. All of that is over and done with for me, and knowing that has helped me make peace with the past.

I don’t use the term ‘survivor’ for myself. I’ve never liked it. It implies that I’m just getting by in life, doesn’t it? I feel like I’m thriving, not surviving. Spending almost six years as a single woman, up until very recently, I kept myself company and enjoyed the silence. I’m comfortable and at peace with the past. It can be done. People who have been raped can come back from it to live an amazing life. What I went through strengthened me to the point where there is very little I worry, or stress out, about. What I went through didn’t damage my attitudes toward sex, thankfully. I never became overly sexual, and I never became fearful of it so that I didn’t want it in my life. I’m open-minded and have no problem talking about it. It’s a natural and enjoyable part of life, and what was done to me did not take that away from me.

If there is anything I would share with the world when it comes to being subjected to rape, it would be to tell those who are victimized that there will come a day when you can be happy again. You really can. I know I am…after a lot of hard work. It was totally worthy everything I went through, however, to end up exactly where I am today

An Even Bigger Change of Life – Time to Confess

To Thine Own Self Be a True Bitch