Okay, so you’ve been seeing someone for a while, presumably happily. Then one of you gets a bright idea. Possibly you both think it’s one of those lightbulb moments, and that it’s brilliant in its simplicity. Perhaps it doesn’t even pop up as an idea per se, but rather a talking point in a conversation, and somehow you wander off the beaten path into “Destination: Insanity,” where no one in the relationship has ventured before. Maybe one of you thinks the other needs a frontal lobotomy, and vows to run away at the first opportunity.

For the sake of argument, however, let’s assume both parties in a relationship are happy enough together that they actually want to share living space, and that when the idea floats into the nearby airspace no one is swatting at it like a pesky mosquito. That being established, now what? Do you scout the apartment listings and hire a moving company? 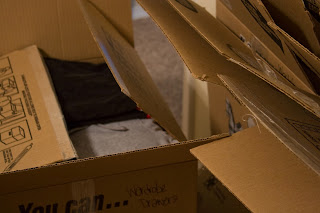 Well, first things first. Determining whether or not it actually is a good idea is probably an idea destined for induction into the Brainiac Hall of Fame. There are a few question that need to be asked here:

In other words, do you have any idea what it’s going to be like to be around this person all the time, and are you absolutely certain you’re not going to end up in jail for killing them at some point down the road?

You need to talk about every single deal-breaking dream you’ve got, whether those dreams involve an infestation of rugrats, ball-and-chain ceremonies, or trips around the world to look at that exact spot where Ghandi went on a hunger strike. When I say deal-breaking, I really mean that. We all have them. We each have many dreams, but not all of them are things that we absolutely must have in our lives before we die. Sometimes there are compromises, but quite often there aren’t.

Discussing how you intend to raise your children, and what portions of your faith you wish those children to adhere to, could save you major arguments in the future – not to mention a divorce and court hearings. If you’re not willing to compromise on the faith of your children, you absolutely must choose someone who is either of the same faith, or who honestly does not care what faith is chosen for their offspring. Do not assume because someone is an atheist that they don’t care if your kids practice Judaism. They may be dead-set against it.

Toothpaste tubes and lavatory lids aside, maybe your schedules conflict in such a way that would make regular bed-sharing difficult, or one of you is a neat-freak who gags at the site of slovenly socks. Is your partner a sports nut that screams so loudly at the television that the neighbour’s rugrats have gone deaf? Maybe you bring your work home with you all the time, and your partner acts more like a frat boy who has to smoke a bowl with his bros.

Kids really make things complicated when they aren’t shared offspring. You have to deal with every one of the above-mentioned issues with your partner’s kids, on top of dealing with whether or not you actually like the spoilt little buggers. You can ooh and aah all you want over your partner’s kid, and put up a good fake front, but you need to be completely honest with yourself about how likely it is that you’ll be able to stand being around them for longer than ten minutes.

Introducing pets is a very delicate process, assuming your pets can’t be kept separate or in cages at all times. If it’s done right you can still have problems if you don’t continue to keep an eye on the situation. However, if it’s done wrong the damage can be permanent. The introduction has to be done cautiously, and only two pets at a time. Both animals need to be fully controlled by their owners, and the experience needs to be a relatively pleasant memory for both creatures. In other words, don’t allow one animal to chomp down on the other and try to shake the life out of it. Have treats handy to distract the animals. Both animals need to feel secure, and know that there’s no threat. Sometimes it’s best if you just allow animals to get used to one another’s scents first, without physically introducing them, if there’s a real danger of one animal attacking the other. Swap their blankets back and forth for a few days.

In the vast majority of polls conducted, sex and money are two of the biggest reasons people fight. I can’t help you with your sex life – mostly because I don’t want to know what weird things you might be getting up to. I have my own weird things to contend with. Money is one area where advance communication can make a world of difference, though. If a compromise is reached before a decision ever has to be made, and both parties follow through on their agreements, all’s well that ends well. If not, expect your own bell to be rung a few time – or even your ears from all the shouting that’s going to go down.

Now this is just my opinion, but then it’s my blog and I’ll have a potty mouth if I want to, but I do not think it’s a good idea to move in with someone (or especially to engage in the matrimonial legal tangle) when you have never had sex with them. Sex being one of those really big issues that people fight about, it makes perfect sense to me to figure out whether or not it’s something you’re likely to fight about. We all have those times when we’ll argue about almost anything in a relationship, but a complete lack of sexual compatibility will result in mind-blowing fights rather than other mind-blowing activities, and quite possibly some nasty insults that your ego might never recover from. Getting your freak on is necessary if you intend to be anything more than friends. I’m sorry, but it’s the truth. If there’s no sexual chemistry or activity, you’re nothing but friends. That’s fine if you’ve spent forty or fifty glorious years together and things have petered out (no pun intended – okay maybe it was), but if you’re just getting started and there’s nothing there you’ve got serious problems and you’re not actually involved in a romantic relationship.

If, after all this insanely boring self-reflection, you still think it’s a good idea to share living space, there remains the possibility a frontal lobotomy is in order. Maybe not, though. Maybe it’ll be the best thing to happen to you. Nobody can answer these questions for you, but if you’re not asking them of yourself you’re probably going to end up wishing for that frontal.

Air Guitar is a Thing of the Past, and the Loss of Pepper

A House Full of Love and Laughter Again

A Glowing Bride – Scottish Steampunk with an Avatar Twist