This was, at one time, a home filled with loving pets. There was a time we had three cats and a ferret. However, due to blockages and damaged kidneys – never mind the $2400 in vet bills that was spent – our one cat had to be put down on April 17th, just over 6 years ago. His name was Whiskey, and every time the Metallica song, “Whiskey in the Jar,” came on, his head would turn right toward the speaker when he heard his name. Losing Whiskey was very difficult for me. It was just after the break-up of my marriage, and in fact his health issues started right before the break-up, so every bit of misery was tied in together. 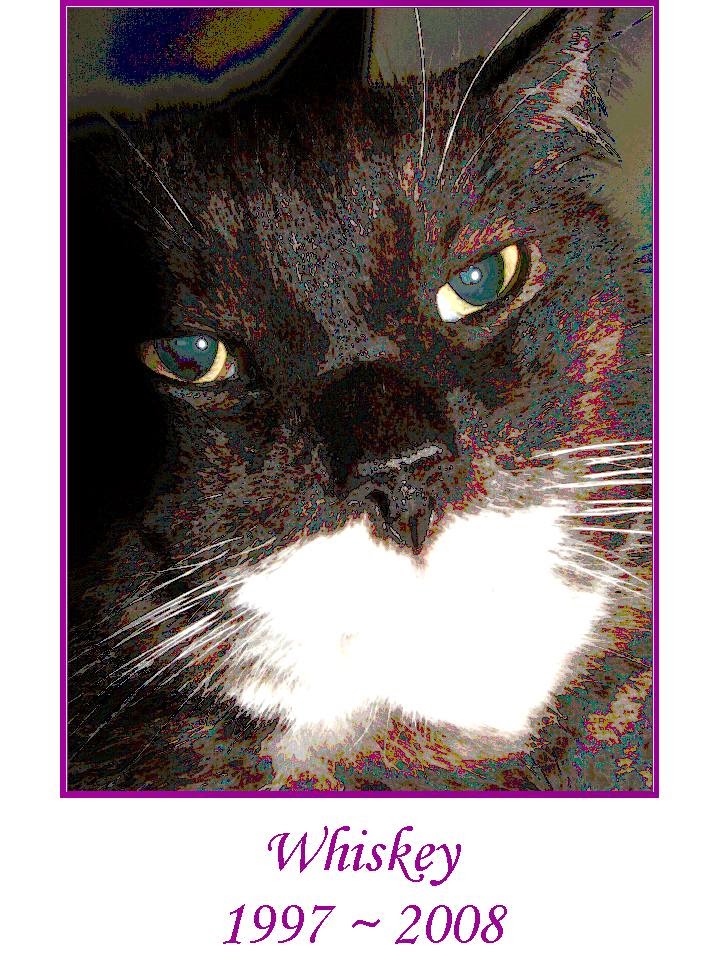 The one thing that got me through losing my cat and my marriage, aside from having my daughter as a roommate, was Stimpy. He was my first ferret, and he stole my heart even before he came home with me. He belonged to a friend of my ex whose daughter was ignoring him, so they decided to take me up on my offer to take him home. I loved him more than my own life. I would have defended him to the death if the circumstances had ever happened. Then he developed tumours in his kidneys, followed by tumours in his pancreas. He developed insulinoma and died – on April 8th of last year. By this time we had another ferret, named Pepper, and so far he’s managed to get us through the devastating loss of Stimpy by making us laugh every single day. It’s the same thing Stimpy did for me for the five years we had him.

It’s been over a year now since we lost Stimpy, and so fate has stepped in to deliver another loss to our happy little menagerie. We lost another cat – his name was Rabbit – on April 20th, just a few days ago. Rabbit was my daughter’s cat rather than mine, and I didn’t have the emotional connection to him that my daughter had, but it’s still damn depressing to watch an animal die. In this case it was a matter of him being really old. Since he was a stray when we took him in, we’re not sure of his exact age, but we think he was 18, since we had him for 17 years and he appeared to be a yearling when he appeared in our lives.

Now we have Dip (otherwise known as Dippy-Do), who is our last remaining cat, and we’ve still got Pepper, our last remaining ferret. Dip, who was named for the white tip of her tail that made her look as though she had dipped her tail into a can of paint, is now a lonely kitty, but she’s getting up there in age, too. She’s considered an elderly cat, though she still seems like a kitten to us. As far as I’m concerned, we won’t be getting any more cats. I’m all about the ferrets these days. I can’t resist them, and I don’t connect with cats the way I used to. I love all animals in general, but I need ferrets in my life. They keep me sane.

So, as soon as possible, we’ll be taking a trip to the ferret shelter in Mississauga. We just have to be certain we’re properly set up for another 2-pound toddler. That’s basically what a ferret is like, in case you were wondering. They have full mobility, they’re really tiny, they’re smarter than cats & dogs, and they get into a ton of mischief. Some ferrets only weigh about a pound, too, so they’re even tinier and can get into the smallest holes, finding themselves trapped in walls, or even getting outside the house or into the furnace where really bad things happen to them. So, a ferret requires preparation in the physical sense, but also monetarily. As ferrets age, they can become very expensive when it comes to vet bills.

Being in the physical situation I’m in right now, there are also limits to what I can do to care for animals. My daughter has taken over anything cat-related, and I deal with ferret ‘stuff.’ Mostly that means cleaning up poop and such, usually in specific corners where there are newspapers or puppy pads put down, but sometimes there are the inappropriate accidents to deal with, too. It depends on how stubborn your ferret is with his or her potty training, and whether or not they’re ‘fixed,’ because marking territory is a very big deal, particularly for male ferrets I believe. I could be wrong there, since I’ve never actually had a female ferret. I’m a little afraid of getting one, as the species is dimorphic, meaning there’s a big difference in size between male and female and the females are smaller. So, I’d have to be really worried about the tiniest holes – like where the register pipes come into the apartment, or areas around the back of the fridge or in the stove.

Unlike most ferret people, I don’t cage mine. I did a very thorough job of ferret-proofing (yes, that’s a real term used by ferret people) so that I could give my boys as much freedom as possible. When I’m sleeping, though, I confine Pepper to the bedroom with me so I can hear everything he’s doing. No matter how well you ferret-proof, you still need to keep an eye on them. If I had to leave to go to a regular job, I would have a cage. I wouldn’t feel secure leaving a ferret unconfined for that many hours, I don’t think.

Losing this latest pet has brought back the loss of Stimpy even more than usual. I still think about him all the time, and I still miss him every single day. There’s a hole left behind from the loss of him, more so than I’ve ever felt with another pet. He was extraordinarily special to me, and the connection I had with him was something I’ve never felt capable of expressing coherently. Pepper soothes the ache, though, and I look forward to bringing another ferret home. When I do go to get one, though, I’ll be bringing home the one that most needs a forever home. I can handle any personality and still feel vast quantities of love for a ferret, so it doesn’t matter how ‘difficult’ he or she might be.

One thing I will say for myself, and for my daughter, is that when we do bring home pets, those pets are never left behind or gotten rid of. As far as we’re concerned those pets are family, and if they’re not welcome, then neither are we. Thankfully I live in a province where landlords are not allowed to kick you out for having a pet, unless they destroy the property or interfere with another tenant’s enjoyment of their home.

I do hope April doesn’t really become a cursed month, but then maybe it’s better this way. Our misery during anniversaries can be confined to that month. You never stop feeling the loss of a pet if you loved them, but the anniversaries are just that little bit more difficult for us.

Real Writers Play With Themselves, Mentally

Toads are Frogs…and They Help Predict the Future